Pro-Animal Picks for the Colorado House and Senate

Also, check out the new 2014 Ballot Buddies from Colorado Voters for Animals to help get humane candidates elected!

Colorado Voters for Animals advocates on behalf of all Coloradans who share the goal of improving our society's treatment of animals. However, we recognize that there are strongly held differences of opinion among animal advocates.

Humane Scorecard for the 113th US Congress

See how your legislators scored in the 2013 Congressional Humane Scorecard.

I received a call yesterday from James Thompson, Sen. Michael Bennet’s regional director, letting me know that the senator has gone on record against the King Amendment in the Farm Bill (H.R.1947 and S.954).

Colorado Voters for Animals seeks to build an informed, engaged and powerful constituency. It’s time for all of us to get educated, get organized and get taken seriously. The Colorado legislative session is right around the corner, and the Capitol is buzzing with activity as legislators prepare their bills. Session officially starts Jan. 8. Here’s a sneak peek at animal protection issues likely to come up:

Colorado Voters for Animals recognized Rep. Beth McCann at a reception on Nov. 6 with a special award for Leadership in Promoting Humane Legislation.

At a public hearing held Oct. 28, 15 Northglenn residents made it clear to the City Council that they favor an ordinance prohibiting pet stores from purchasing commercially bred dogs, cats and rabbits.

Attention Northglenn residents: Your help is critical in getting this important ordinance passed! The Northglenn City Council will hold on Oct. 28 a Public Hearing of a draft ordinance that will stop pet stores from purchasing commercially bred puppies, kittens and rabbits.

Senate Bill 13-226, “The Dog Protection Act,” was signed into law by Gov. John Hickenlooper at a special ceremony at the Denver Animal Shelter.

Senate Bill 13-201, designating shelter dogs and cats as the official Colorado state pets, was signed into law May 13 by Gov. John Hickenlooper. Gov. Hickenlooper brought his own shelter dog, Skye, and his son, Teddy, to the ceremony at the Denver Animal Shelter. The law took effect in August.

Earlier this year, the legislative team from Colorado Voters for Animals met with Rep. Diana DeGette's Denver staff to discuss and request co-sponsorship of the Egg Products Inspection Act Amendments of 2012, H.R. 3798. We are pleased to announce that Rep. DeGette has agreed to add her name as a co-sponsor of the bill, according to Jen Clanahan, her senior policy adviser and deputy press secretary.

Please see our Legislation page for details of the corresponding bill in the U. S. Senate. Passage of this bill would provide improved living conditions for the 280 million egg- laying hens across the United States. 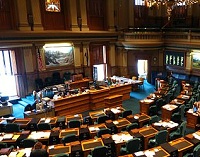 Pro-Animal Picks for the Colorado House and Senate

Also, check out the new 2012 Scorecard from Colorado Voters for Animals to help get humane candidates elected!