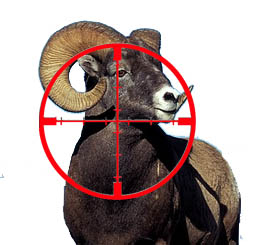 Senator Ray Scott, District 7, Mesa County, has introduced a bill to create a raffle where, for $50, any hunter can have the chance to win one of ten licenses to kill an iconic Colorado animal of their choosing, such as a Rocky Mountain Bighorn Sheep. Under his proposal raffle tickets would be sold for $50 each, with a per-hunter limit of 25 tickets.

"The Grand Slam Wildlife Hunting Raffle," is unnecessary. Its purpose has nothing to do with predator control or culling over abundant populations. Instead, it appears Scott wants to entice trophy hunters to join in a game where winners can check off their kills on a scorecard, much like checking off items on a shopping list. The raffle would also entice out of state hunters whose home state either bans killing these species or lacks a native population of the desired trophy animal.

Scott believes the raffle will generate $277,000 of revenue in the first year, although it’s not entirely clear where this money would go. According to Colorado Parks& Wildlife (which does not benefit directly from the raffle), last year visitors and wildlife viewers generated $3.3 Billion dollars in revenues, versus hunting fees of $919 million. Obviously, more people prefer viewing Colorado’s wildlife over killing it.


Contact your elected lawmakers and tell them you oppose SB18-0137, the Grand Slam Wildlife Raffle. If you don’t know who your elected officials are you can go to https://leg.colorado.gov/find-my-legislator to look them up.